Apple-1, the Cupertino-based tech giant’s first computer which debuted in 1976 has been bought by an unidentified person for $365,000. 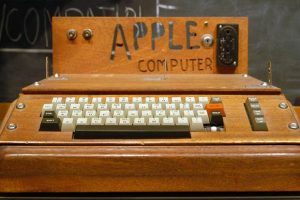 According to a Fortune report, auction house Christie’s sold the original and working Apple-1 computer at an auction at its New York City office last week.

Although there were similar computers on sale from other manufacturers, Apple-1 came with a pre-assembled motherboard, which “put Apple far ahead of its competitors”, according to Christie’s auction listing.

It is speculated that the recent Apple-1 sold at a lower price as it wasn’t a “pure” machine with extras like a green case and a different computer chip. In previous auctions, one Apple-1 sold for as much as $905,000 and another for $671,400.

According to Christie’s, nearly 50 historic Apple-1 computers still exist, with many being displayed at museums around the world including the Smithsonian American Art Museum in Washington, DC.