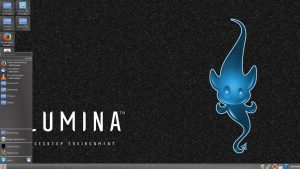 The Lumina Desktop Environment desktop is a standout in the crowded field of Linux graphical user interface choices.

Lumina was first developed for the BSD family of operating systems (such as FreeBSD and TrueOS). It is gaining interest among Linux users, having been introduced for a growing number of Linux distros.

I installed Fedora 24, Manjaro and PCLinuxOS on several test computers. I chose these popular Linux distros because they have add-on installations available from the Lumina project. This gave me an opportunity to take a first look at the Lumina desktop without applying an excessive amount of overhead.

Lumina is not yet bundled into any distros. It can be applied to most other Linux distros, but that would require building the packages from source code.

I had the best user experience with Fedora 24. I installed Lumina on all three distros on both hard drives and virtual machines. The performance was much better on bare metal. It seems that Lumina does not function fully on a VM-installed OS.