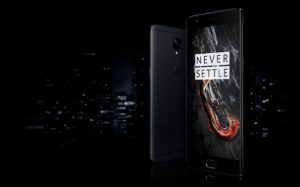 Soon after launching a limited ‘Colette’ edition of the OnePlus 3T in Paris, OnePlus has launched a humbler (128GB) Midnight Black variant of the phone in the Indian market. Although clad in stark black, the new version of the OnePlus 3T comes sans the collector’s edition tag of the OnePlus 3T Colette clearly making this one a more mass-market phone. Well, not really. The Midnight Black version is also a limited edition phone that will be available in limited quantities on March 31 at 2PM IST on OnePlus’ online store and Amazon India for Rs 34,999. Clearly, not so much a mass market phone after all. That status still holds ground for the Gunmetal and Soft Gold versions though. Needless to say, it’s nice to see OnePlus playing with colours to keep the hype alive before it launches its next flagship phone.

“Our users have been asking for an all-black OnePlus 3T, so our team worked hard to bring them the most stunning OnePlus phone to-date in the OnePlus 3T Midnight Black,” said Pete Lau, founder and CEO of OnePlus.

On the inside, it is still pretty much the same deal. The OnePlus 3T, if you haven’t heard already, is simply the OnePlus 3 with a faster processor and a bigger battery. The phone is powered by a 2.35GHz quad-core Qualcomm Snapdragon 821 processor (over the original’s Snapdragon 820) coupled with Adreno 530 GPU. It is backed by a 3,400 battery, as opposed to the original that came with a 3,000mAh battery. Just like the original OnePlus 3, the OnePlus 3T boasts of a full-metal unibody and a front-mounted fingerprint scanner which is claimed to unlock the phone in just 0.2 seconds. It supports both physical capacitive and on-screen navigation buttons and the usual array of sensors like accelerometer, gyroscope and proximity sensors. Also, it retains the OnePlus 3’s (and OnePlus 2’s) Alert Slider which is basically a quick notification toggle (all, priority, and none) to quickly sort your app notifications.

The OnePlus 3T comes with a USB Type-C port for charging and data-syncing purposes, a bottom-facing speaker out and dualSIM (nanoSIM) support.

The phone has a 5.5-inch fullHD AMOLED display with a 1920×1080 pixels resolution. The phone comes with curved 2.5D Corning Gorilla glass 4. It comes with 6GB RAM and 64GB/128GB of internal memory which is non-expandable. The phone supports 4G LTE and NFC connectivity options and runs Android 6.0.1 Marshmallow-based OxygetOS out-of-the-box. The OnePlus 3T just like the OnePlus 3 offers near-stock Android experience with few additions like Shelf recent apps and quick contacts aggregator and system-wide Dark Theme thrown in.

On the optics front, it sports a 16-megapixel camera (Sony IMX 298) on the rear with PDAF, f/2.0 aperture and Optical Image Stabilisation. The rear snapper is capable of recording time-lapse, 4K video and RAW file format. Additionally, the phone comes with EIS for enhanced stabilisation while shooting videos. On the front, it comes with a 16-megapixel camera as opposed to the original that came with an 8-megapixel selfie-shooter.