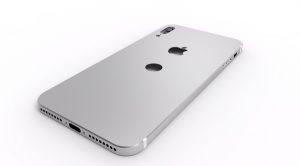 As the expected fall debut of Apple’s new phones nears, rumors have taken hold about the new models this week, based on new reports from analysts and leaks from Apple’s supply chain. As with all speculative reports, it’s best to take this information with a grain of salt. Apple did not immediately respond to a request for comment.

Following are some of the rumors that were heard so far about the next iPhone.

The next high-end version of the iPhone may have a new type of screen called an OLED (organic light-emitting diode). OLED screens boast more vivid colors, deeper blacks and improved battery life. But they are also more difficult to produce, particularly at the levels that Apple requires for the iPhone.

New reports indicate that Apple will eventually move completely to OLED screens, starting with the 10th-anniversary iPhone. The company would then release three OLED models in the second half of 2018. These reports are based largely on an article from the Nikkei Asian Business Review, which cites unnamed sources in Apple’s Asian supply chain. This would make some sense. There have been reports for years that Apple wants to switch to an OLED screen. Such screens are the standard on iPhone competitors, particularly those from Samsung — a top OLED screen manufacturer and an Apple supplier itself. The Nikkei report said that Apple has also invested in LG’s OLED manufacturing department, which indicates that the company is interested in finding ways to make the screens at an iPhone scale.

Apple is expected to ditch the home button for the high-end iPhone in favor of an edge-to-edge screen. But that change would eliminate the location of the fingerprint reader. That’s led some to wonder whether Apple will move the reader, embed it in the screen or even get rid of it altogether.

Getting a bit more speculative, the popular YouTube channel “EverythingApplePro” drew significant tech media attention when it posted a detailed metal-and-glass mock-up of the premium iPhone, which it said was sent by a Chinese case maker. That dummy phone did not have a spot on the front of the phone for a fingerprint reader, although it did show a case with a cutout in the back of the phone, over the Apple logo. That could mean that, like on competing smartphones, the fingerprint reader could go there. Or the case may just be designed to show off the Apple logo.

Still, it would be surprising to see Apple drop the fingerprint reader, particularly given how hard it has pushed Touch ID in recent years and how integral it has become to the phone for logging in and purchasing.

With the possibility that Apple could ditch the fingerprint reader,  the new question of what would replace it, arises.

Facial recognition seems to be the top candidate being speculated. Previous reports have indicated the company is testing advanced facial recognition as an authentication method. A report from Bloomberg cited unnamed sources “familiar with the product” who said that facial recognition could be used to unlock phones, purchase goods and open secure apps. However, it is rumored that Apple is working on technology that would use a phone’s camera to scan your face — even when the phone is asleep — to unlock the device.

Facial recognition makes a lot of sense as a verification tool — particularly if Apple gets rid of Touch ID. It would offer another option for biometric authentication, which many find more convenient than passwords and passcodes.

The face scans rumored to be in development by Apple could be more consistent than fingerprint readers, which can act up when, for example, your fingers get wet. It also could be easier to use than a fingerprint —  it would be a more seamless experience. Still, there are situations where it may not make as much sense to use a face scan — think particularly about the Check-Out line. Apple may have a solution for using your face as a form of authentication at the cash register that I haven’t thought of. But, overall, I think that scanning your face before a purchase sounds like more of a hassle than just holding your phone to a reader.