Most experts believe the first industry to be upended by autonomous driving will be the trucking sector. What better use case for driverless technology than long-haul trucking where most of the driving is confined to the highway? The Swedish startup Einride certainly buys into this vision. It recently unveiled a prototype of a self-driving truck that completely lacks a steering wheel, pedals, a windshield, and, well, the whole cabin, really. 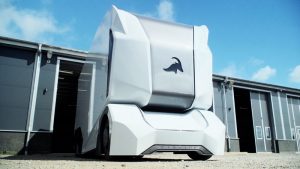 The all-electric T-pod is much shorter than your average traditional tractor trailer, clocking in at just 23 feet long, which is likely due to the absence of the cabin. Einride says the T-pod will weigh 20 tons at full load, which is comparable to a Class 8 truck. The T-pod can be controlled remotely by a human operator, or can operate autonomously without human intervention, the company says.

Einride says it aims to deliver “a complete transport system between Gothenburg-Helsingborg” by 2020. This transport system will involve 200 T-pods with associated charging stations on the route. To date, Einride says it has already filled 60 percent of the total number that will travel between Gothenburg and Helsingborg. The system’s first route will have a capacity of up to 2,000,000 pallets per year. The full-scale prototype was on-hand this week at Almedalen, a week-long Swedish political event taking place on the island of Gotland. 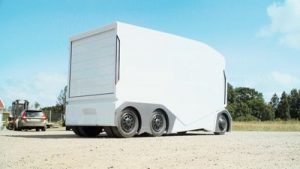 No doubt the image of a cabin-less truck will further stoke fears that autonomous technology will lead to enormous displacement in the workforce. In the US, 4.4 million jobs are related to driving, of which trucking jobs comprise about 2.5 million. A recent study found that automated trucks could reduce the demand for drivers as much as 50 to 70 percent in the US and Europe by 2030, with 4.4 million of the 6.4 million professional drivers on both continents rendered obsolete.

But even in the face of devastating job losses, the appetite among tech startups for self-driving trucks has not waned. Alphabet’s Waymo is working on a prototype, as is Uber. (The two startups are embroiled in a bitter legal dispute over the acquisition of the self-driving truck firm Otto by Uber.) Meanwhile, Tesla is working on its own all-electric semi, which will likely include some autonomous capabilities. But most, including smaller startups like Embark, don’t envision completely cutting out the driver like Einride.

In fact, the only recent comparison to Einride’s T-pod prototype that I could recall were the killer, autonomous tractor trailers from the movie Logan. The scenes with the autonomous trucks are short, but gripping. They feature scores of menacing, cab-less trucks racing down the dystopian highways without any care for the human characters caught in their path. It’s a scary vision of the future, and one that may be closer to reality than we realize.