Microsoft’s new surface laptop, which is soon to be released, will be a compact rival to the core Apple MacBook. Priced at $999, the Microsoft Surface laptop is targeted  at students. This is the first device to launch with Windows 10 S as the operating system. 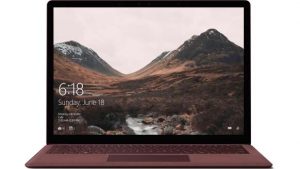 Following are some of the noticeable points :

1) It has a great hardware and incredibly light

The Microsoft surface laptop has a 13.5-inch touchscreen,  uses “Windows Hello” to let you sign in with your face, comes in four different colors, and has a keyboard totally covered in classy Alcantara fabric. The machine remains pretty powerful with a choice between an Intel Core i5 or an Intel Core i7 processor. At just 1.25kg, the Surface Laptop is very portable so you can take it just about anywhere without the fear of back pain. As per Microsoft, the surface laptop’s battery can last for 14.5 hours of video watching.

3) You have to get used to Microsoft Edge browser

As the default browser of Windows 10 S is Microsoft Edge, and the other familiar browsers, such as Firefox or Chrome are not yet available on Windows store, it is better to get used to the Edge browser.

Windows 10 S allows to download the software from third party web sites. But, it cannot be installed like how you install on a regular Windows 10 machine. However, it is possible to install the downloaded software if you upgrade the operating system to Windows 10 Pro. This upgrade option to Windows 10 Pro is offered free of charge until December 2017. Though there may not be any data loss during the upgrade, it is better to take backups of your personal files, just to be on the safer side.

Also, it should be noted that reverting back from Windows 10 Pro to Windows 10 S is not possible.

So it looks like a good deal for those who are in the market for buying a new light-weight laptop.