An asteroid collision with the Earth can happen in just a matter of time, according to an astrophysicist from Ireleand. 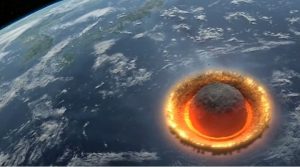 Astrophysicist Alan Fitzsimmons, from the Queen’s University in Belfast, Ireland, issued the warning ahead of Asteroid Day on June 30, which was set to remember the 1908 Tunguska event in Siberia, when an explosion believed to have been caused by a small asteroid damaged hundreds of miles of forest and knocked down about 80 million trees.

“Astronomers find near-Earth asteroids every day and most are harmless. But it is still possible the next Tunguska would take us by surprise, and although we are much better at finding larger asteroids, that does us no good if we are not prepared to do something about them,” he said.

“It is important to know that scientists and engineers have made great strides in detecting Near-Earth Asteroids and understanding the threat posed by them. Over 1,800 potentially hazardous objects have been discovered so far, but there are many more waiting to be found,” Fitzsimmons said.

Scientists believe that early detection is crucial to keeping the planet safe from threats of near-Earth objects (NEO), such as asteroids.