Opera has released a new version, code named ‘Reborn’, with provision to launch WhatsApp, Telegram and Facebook Messenger from the sidebar. 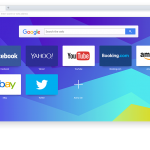 The Norwegian browser maker (acquired by a Chinese tech company in 2016), has announced that the latest version of its browser is adopting some messaging features from Neon, an experimental version of Opera. The new features include built-in support for Facebook Messenger, Telegram, and WhatsApp in Opera 45. The chat window is available at the same browser window’s sidebar. There are keyboard shortcuts to switch between multiple chat apps, too.

There’s nothing particularly special about Opera’s versions of the messaging programs. WhatsApp is just WhatsApp Web that everyone already uses, while clicking the Facebook Messenger takes you to Messenger.com.

What’s different about Opera’s approach is that the messaging web apps don’t open in a new tab. Instead, the messengers appear in a panel that pops out from the browser’s left rail.

The new browser also has the features introduced in the previous version – built-in ad blocking and VPN functionality. If you turn on Opera’s ad blocker, four sites are automatically whitelisted: Facebook, Google, Yandex, and Baidu. Opera is powered by Blink (a fork of WebKit used by Chrome) under the hood. On Windows at least, Opera Reborn will apparently “send more videos to the GPU for decoding,” improving performance and battery life.

1 thought on “Opera’s new release has built-in sidebars for WhatsApp, Telegram and Messenger”