Windows Powershell is a great tool for writing Windows based administration scripts. It is getting popular day-by-day due to its object oriented capabilities. Also the administrators find it very handy for writing scripts  in a Windows platform much similar to the Unix based shell scripting.

PowerShell 2.0 is installed by default on Windows 7 and Windows Server 2008 R2. The PowerShell ISE (Integrated Scripting Environment) is installed by default on Windows 7, but not Windows Server 2008 R2. You can use the following information to install the ISE on your 2008 R2 server (as long as it’s running the full GUI and not the Core installation).

Launch PowerShell from the start menu or type “powershell” at Cortana search box on Windows 10: 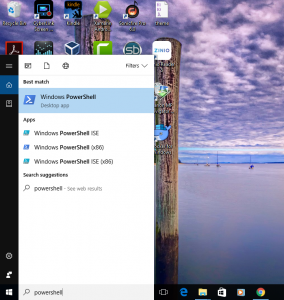 If you attempted to run this on the Core (no GUI) installation of Windows Server, you would receive the following error:

PowerShell scripts are disabled by default.

Typing commands into the ISE and executing them will work, but once they are saved as a script, you will receive the following error when you attempt to execute it:

Using the following command, the execution of scripts is set to “RemoteSigned” which requires that scripts downloaded from the Internet be signed by a trusted publisher:

The execution policy can be also changed for a single session by starting powershell with the argument from the command line: